There’s a great talk from Robert Sapolsky about what makes us human (available on Hulu). It’s worth watching. After watching the talk, I had an insight into serial entrepreneurs — people who start multiple companies, even after they’ve made many millions of dollars. And some do it multiple times without ever making any money.

Working long hours, for little pay, for years (especially if  you have millions of dollars) doesn’t make sense to most people. But dopamine, a reward chemical in the brain, helps explain why these people exist.

The way you might expect dopamine to work, is you would be rewarded for doing work with a nice big shot of dopamine. 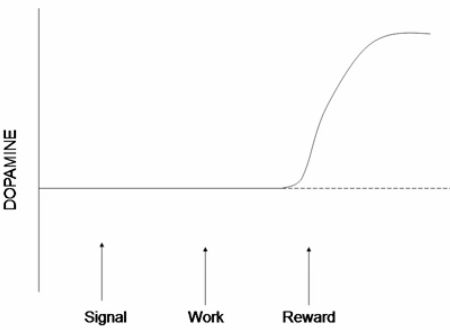 Turns out, this is not how dopamine works. As with lots of fun discoveries, scientists ran an experiment on some chimps. The experiment involved having a monkey pull a lever (work) that would release some food (reward). The studies showed that dopamine is released before the chimp does the work, in anticipation of a reward. As soon as there is a signal to do work, dopamine spikes. 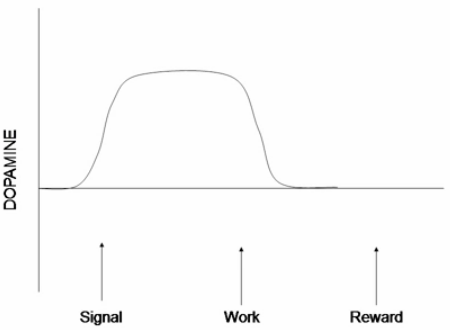 And if there is an element of uncertainty in receiving the reward after doing work, the dopamine spikes even higher! 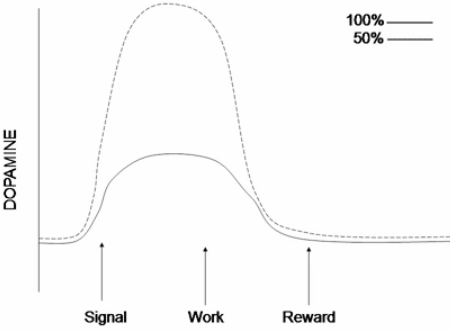 From a neuro-chemical perspective, we’re very similar to chimps – we crave behaviors, such as eating, that release dopamine. And behaviors such as gambling that involve uncertainty are particularly gratifying and addictive. But as Dr. Sapolsky explains, we humans are uniquely gifted in our ability to extend the period of time between doing the work and receiving the reward. For most animals the reward needs to be near immediate. Humans, however, can delay receiving our reward for days, weeks, or years. And entrepreneurs seem to be uniquely gifted among humans in their ability to delay a reward for years. During this period of delay, entrepreneurs can continue to have dopamine spikes in the anticipation of a reward.

What does this teach us about serial entrepreneurs?

Put all of this together and it’s a recipe for the serial entrepreneur.

After an entrepreneur sells a company and makes millions, they’ve received a tremendous reward. But after the reality of the reward sets in, there’s a huge let-down. The dopamine disappears because there’s no more anticipation. And the uncertainty involved in entrepreneurship means the (now successful) entrepreneur is used to very high levels of dopamine, which is now gone. This person is uniquely well suited to waiting for years to receive a reward. A new venture allows the entrepreneur to release tremendous amounts of dopamine due to uncertainty for extended periods of time in anticipation of some, even greater reward than the last time around.

Of course, this is a descriptive observation and not everyone behaves this way. Some people make a lot of money and hang out on a beach for the rest of their lives. But so many entrepreneurs do it again and again that there’s some reason why serial entrepreneurs exist — my money is on the fact that we aren’t that different from chimps.

Dr. Sopolsky’s talks is one of my favorite videos on Hulu (and I’ve seen a lot). Check it out
http://www.hulu.com/embed/MZh6hHfrMrvCICjfzYGNuw?shared_ad_id=68930

View all posts by avichal

8 thoughts on “Why do serial entrepreneurs exist”